Three Musketeers Week 2: A Bridge, a Ferret, and a Little Prince 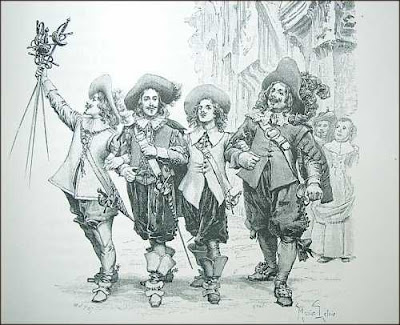 HOMEWORK: We began class today by reviewing the vocabulary words they looked up, the musketeer terms they researched and going over the reading comprehension questions.
The most important thing to remember from chapter 1 is the way D'Artagnan responds to offense, throwing himself immediately into life-threatening conflict over what seems to us to be a small irritation. D'Artagnan's behavior at the beginning of the novel is "provincial" and unsophisticated. He doesn't understand the way the world works, he's not into trickery and subterfuge -- he is aggressive and uncomplicated, and of course this gets him into trouble. This is D'Artagnan "before."
The most important thing I want them to remember from chapter 2 is the contrast between the way D'Artagnan was raised (to respect the King and Cardinal) and the way the Parisians behave, making fun of both. We talked about how Paris is a whole new world for D'Artagnan, and how he respects and loves the musketeers as if they are superheroes. Meeting Porthos, Aramis and Athos would be kind of like a kid today walking into a room with Superman, Spiderman, and Batman. He also believes at this point that the King and Cardinal are both noble figures worthy of reverence and obedience. Again, this is D'Artagnan "before."
FRENCH: Here are our French words for today:
Merci Thank you
Du rien. You’re welcome.
Tres bien Very good.
S’il vous plait Please
We talked about the many uses for the phrase "tres bien" and practiced saying it with correct slang pronunciation, which does not at all sound like it is written.
DISCUSSION: We read about Alexandre Dumas and learned some biographical information. Three important points here: First, Dumas was multiracial, and that was a big deal in 19th century France. His African ethnicity possibly made people take him less seriously, maybe affected the way he was received in literary/academic circles. Second, The Three Musketeers was written as a serial novel, which means there were lots of cliffhangers, and Dumas profited by getting his characters into hairy situations and then getting them out. Dumas was an adventure writer -- his books were meant to be exciting and entertaining. He was a pioneer in this genre, combining action, romance, and drama. Third, Dumas lived large -- he traveled a lot, loved to swordfight, cook, eat, and was a major womanizer. He was a big character, physically and figuratively -- a very alive and exciting kind of guy.
DANCE: We practiced our three dances: Il Court le Furet, Le Petit Prince, and Sur le Pont d'Avignon. Silliness ensued. We're getting our movements down, and picking up some of the French. No stress on learning this; we have all semester to absorb it.
SWORDPLAY: Today in the academic track class I introduced the idea of choreography and how in movies and plays, swordfights are not just free-for-alls that the actors can play out however they want. We talked about staging fights with a partner and I gave the kids time to get together with a partner and stage some moves. As of now, they know how to slash supinate and pronate, and how to block those slashes with the opposite slash in a figure 8. They also know how to thrust and block the thrust, and how to salute. And yet, all the choreographed demonstrations that resulted from our efforts ended in a bad death.
VOCABULARY: Here are their vocabulary words for next week. They should find them and highlight them in the book, and look them up or ask for definitions when necessary. Note: There is a swear in here, not necessary to translate it directly, just translate as "Zoinks!" or whatever. I include these swears because they appear in the book. It's Dumas' fault. Blame him.
Daredevil
Mordieu
Entreaty
Subsidiary
Tenacity
Viaticum
Flattery
Fanfaronade
Reprimand
Interim
ASSIGNMENT: The children are to read chapters 3 and 4 in the Pevear, or chapter 2 in the Usborne, and the academic track should be able to answer the following questions:
1. What made M. Treville angry at Athos, Porthos, and Aramis?
2. Why did Treville tell D’Artagnan that he was devoted to the Cardinal?
3. What did D’Artagnan leave in Treville’s office when he ran after the unknown man?
4. With what three people did D’Artagnan arrange to duel?
5. How did he get on each one’s bad side?
Posted by Lydia Netzer at 4:07 PM