This weekend I'm hosting a pizza party for some young teens at my house. We're going to discuss the book Ender's Game before going out to see it in IMAX 3D. The kids have all read the book to prepare, and another mom and I put together this list of questions to spark the discussion. Enjoy! 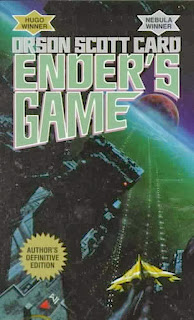 1. Quote: “Knocking him down won the first fight.  I wanted to win all the next ones too.  So they’d leave me alone….It isn’t what he did, Mrs. Wiggin, It’s why.”

Why do you think the “why” of what Ender had to say was important?  How does  that factor into his ability to save the world later in the story?  What was it about Ender that made him a better match for his later responsibilities than Peter or Valentine might have been?

2. Quote: “He walked the short bridge to the door in the shuttle.  He noticed that the wall to his right was carpeted like a floor.  That was where the disorientation began.  The moment he thought of the wall as the floor, he began to feel like he was walking on a wall.  He got up to the ladder and noticed that the vertical surface behind it was also carpeted.  I am climbing up the floor.”

Ender sees his surroundings differently than the other students in his class, and this helps him to be especially suited to the task that lies ahead of him.  Have you ever found yourself in a situation where you saw things differently than everyone else and it worked in your favor?

Do you think it is OK to do things that are destructive if you perceive the overall endpoint to be positive?

Why do you think it would have negatively impacted Ender’s capabilities as a commander if he had had a strong “parent” figure?

5. Quote: “Human being didn’t evolve to lie around on lakes. Killing’s the first thing we learned. And it’s a good thing we did.”

Is killing a necessary part of human existence? Why do we simultaneously believe murder is the worst crime you can commit and also that killing is essential to our survival?

6. Quote: “Thank you for this, Peter.  For dry eyes and silent weeping.  You taught me how to hide anything I felt.”

Can you think of a time when someone hurt you, but it taught you something you were thankful for later? 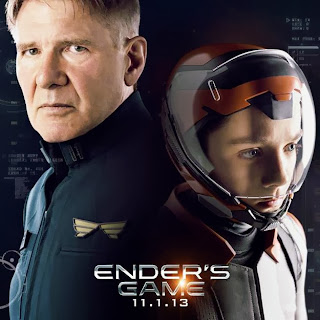 8. Mazer Rackham gave up living a normal life so that he could artificially stay alive in order to train Ender. Do you think this was a noble sacrifice? Would you have done the same? Do you think it was a hard choice for him?

9. Are you a builder or a destroyer? Do you think there are only two types of people in the world? What other types would you add to that paradigm?

10. The adults decide it is okay to risk Ender's life and sanity to save Earth. Do you think that you would give your own life, or risk the life of someone you love to save humanity in its current state today?

11. Quote: “Perhaps it’s impossible to wear an identity without becoming what you pretend to be.”

12. Do you sympathize with Ender when he just wants to keep on swimming in the lake? Why do you think he felt that way. Do you ever feel that way? What breaks you out of that mood and into action?

13. Were the adults right to lie to the children about what they were actually doing in the "simulation"? Do you think it would have changed the outcome if they had known that they were fighting a real war?

14. This book was written before internet usage was thought of as being useful outside of a university setting.  What do you think about Orson Scott Card’s idea of communicating through a network of computers?  Do you think science fiction writers sometimes contribute ideas to future scientists and technologists? Did the internet turn out as he envisioned it? Are there international networks where people hold serious debates and change minds with strong ideas?

15. If you were Ender, do you think you would be satisfied having been useful and having helped humanity, even though you had to make enormous personal sacrifices to achieve that (leaving your family, not having a normal childhood, not being able to return to Earth?)

16. How would the book have been different if it had ended before Ender discovered the bugger queen and connected with her mind?

17. When you are reading the book, and you are being told that Ender is still "in training" and that the battle is still to come, and yet you know that you only have a few pages left before the end, does that change the way you interpret what's happening? Since you knew you were near the conclusion, did you suspect at all that the battle was happening already?

18. With whom do you identify more -- Peter, Valentine, or Ender? Are there any aspects of the two children you least identify with that you can connect with and understand?

19. Ender was a third child, which was rare in the fictional setting in which he was born.  Do you think his unique birth order contributed to his understanding of different personalities and his leadership capabilities?  Do you think being one of three, rather than an only child or a second child made it easier for him to learn to adapt to the social setting at Battle School?

20. What do you make of the rules regarding having children in the world of the book? Do you think it's fair to limit people's reproduction, or give special favors and permissions based on intelligence or other genetic qualities?
Posted by Lydia Netzer at 8:28 AM