Quiz: Today the kids took a mega-quiz! We tackled twenty questions on the Roman dinner party and the Roman virtues. Wow, it was intense. We also had time to sing all of our songs, and in our "Arma Virumque Cano" song we added the verse that starts "Multa quoque." That is exciting. The kids are learning so much Latin, and they sound great!

Academic Track: I wrote the fifteen Roman Virtues (and one Roman vice: furor) onto cards. I gave pietas, dignitas, gravitas, and furor extra cards since I want to emphasize those. I had the children pair up and gave each pair three cards to act out. They had some time to plan their sketches and then they each had a chance to get up in front of the class and act out their virtues so we could guess which one they were portraying. It was pretty hilarious! Here are a couple of pictures: 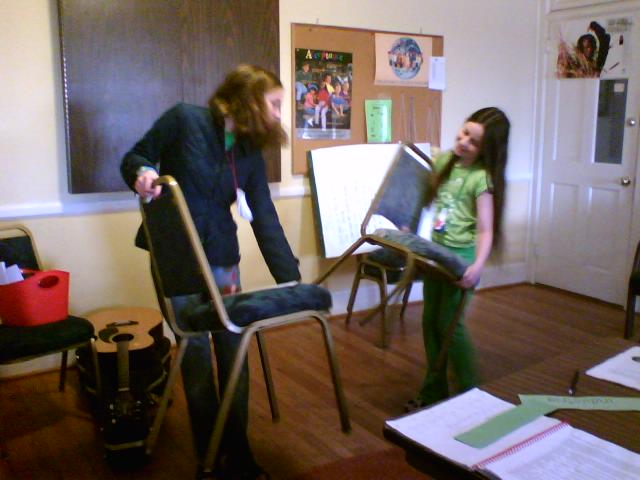 Celia and Martina preparing to act out constantia. 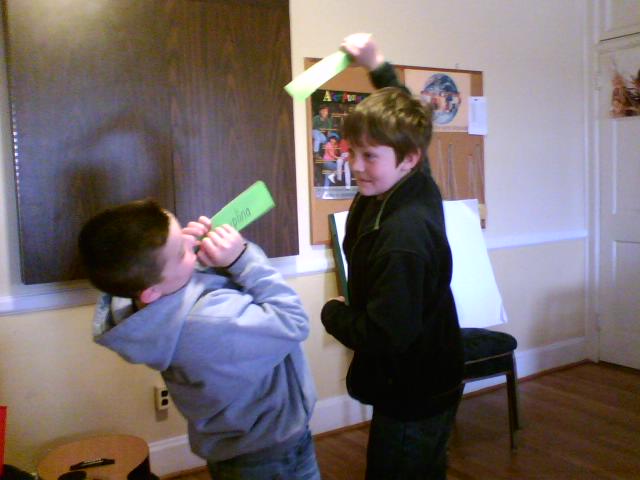 Richard demonstrating clementia. Seriously, he's just about to demonstrate it.

This was great fun. We even got to try out some Roman Virtue Pictionary, and I encourage you to try this with your kids at home. Take your list of 15 virtues and try and draw each of them. You draw and have your kids guess, then guess your kids' drawings. Maybe afterward you can turn it into a comic!

Enrichment Track: In the enrichment track we acted these words out together, and we chose four words on which to focus: furor, pietas, dignitas, and gravitas. First I wrote them on the white board and we sounded them out, then I acted them out myself and let the kids guess which one I was going for. After I'd done them each a bunch of times, I let the kids take turns coming up to stand in front of the board and do a virtue. Here are a couple of pictures: 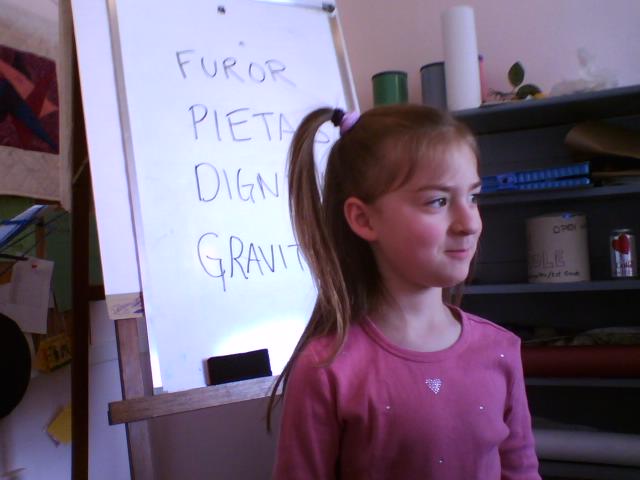 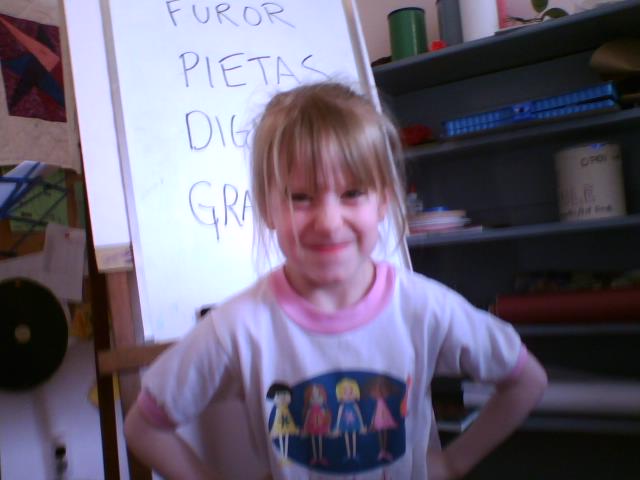 I can't resist sharing -- here's a video of the whole class together doing charades:

Assignment: Next week we're going to act out our gladiator games. Today the kids picked their roles. In the academic classes, we had some very interesting choices: assassin, guard, condemned criminal, emperor, etc. In the enrichment class, we also had interesting choices: gladiators, emperor, archers, and also a unicorn, pony, shark, and pet kitten. It's important to let the kids feel happy and comfortable with their roles, and look forward to the event. If you have to stretch to prepare a narrative for them that includes three emperors or a unicorn posse or a rainbow sparkle fairy or whatever, you can do that! Asking the kids to act out something violent is a sketchy business -- make sure it's a learning experience but also fun. Dressing up is great but not mandatory! Make sure for next week they have read the Funeral Games chapter of the book, and have read and understood the "Gladiator Games Fast Facts" sheet.